Is there a way to reach out to a new generation of internet savvy users?   I think so. 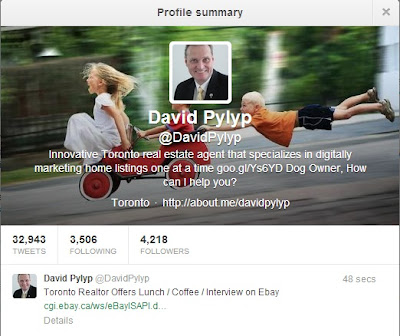 What are you doing that will get you noticed?

Available for Opinion of Value or Market Evaluations,  Discussion of Senior Housing Issues / Planning and Options for Seniors,  Condominium Board participation, YouTube Advertising and SEO for Website Managers, Social Media Engagement or Teaching a Class

TD Bank issued their economic forecast in March 2013.   While most are lamenting the additional strains placed on First Time Buyers, TD rightly graphs the reduction in the number of First Time Purchasers by age group.  Immediately beside this is a graph of How many will be over the age of 65 during the next few decades.   After 2030 the Mature market will continue at 25% of the entire Canadian Population?

What does this imply?   ZERO net growth over the cost of inflation.

Thank you to Romy Alegria with TD for providing the following details;


Romy Alegria is forming a new group in Toronto for Women's Prosperity.  Are you interested?  They even started a Facebook Group.

Do you agree with the details in the News release?   The information in the Graphs?  Will you be downsizing or have you moved on from your parents home in the Toronto GTA.  Now its an estate sale.   Call me

Posted by David Pylyp at 9:48 AM No comments:

Storage Lockers are in Toronto Too!

We have a thriving Storage Locker Business in Toronto. Our Family will squirrel away items that could be used later, then We watch them find long lost and abandoned family heirlooms and items of value.  Our sense of curiosity peaked by the search through someone else's life.  But its happening every day...

Yet It could so quickly become our parents who put things in storage to make space in their home and all is forgotten for the sake of a few index cards and organization.


Many people have off-site storage lockers Where they SAVE items that no longer have purpose. What may have started as a short term solution for their storage needs, but has become a long term issue.

The cost of paying for a locker can ADD up to thousands per year. Unless an index of all the items was made when the locker was filled, most people don't even remember what is in the locker.

Lets deal with it Now

Staging and Organizing your Toronto Home and preparing to sell?

Have they finally Caused the Bubble?


The Toronto Real Estate Board released its February sales number to the glee of many in financial circles.  Sales Collapsed by 20%  SHOUT the headlines! 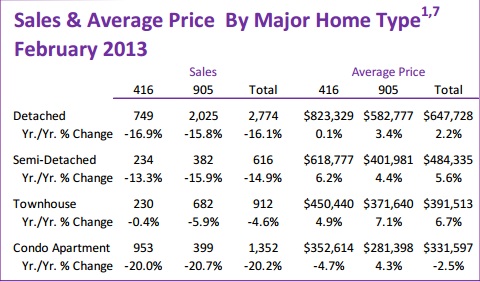 In the front page chart

This is in direct conflict with the chart immediately below that shows new listings at 11,052  down 12% from 2012. 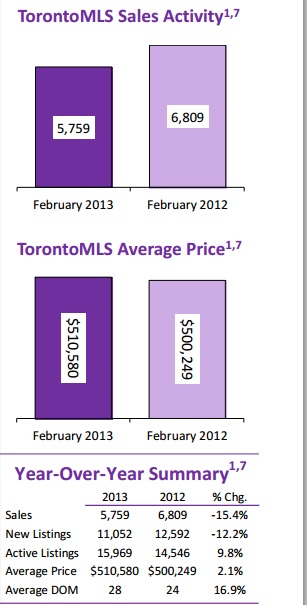 YET Days on Market [DOM] increased to 28.... 28 days on market is a one month supply of homes for sale A Seller's Market FIRMLY continues [in the Toronto resale market] with multiple offers on detached and semi detached properties all around the GTA.

Now, have a look at the chart above.  Detached home sales in the 416 numbered 749.  The 905 area code sold 2,025 homes in that same period.  A WHOPPING 3 times the number.  So, as the singles start families or find their BFF and want more space, they migrate from the glamour of the city core and find their own white picket fence. Is the Toronto Land Transfer Tax singularly to blame?  The average home price in Mississauga or Milton, Burlington is more appealing but now you need to go substantially further to save. Ajax and Oshawa are very appealing.

The most confusing is the BOM announcing 2.99% fixed for 5 year financing when typically the interest rates increase in spring to coincide with the RRSP and Tax Deadlines combined with mortgage demand for spring borrowings.  Simply Put, There are annual interest rate fluctuations to match Home Buyer demand.

This creates conflicting media messages that make Buyers Hesitate. Additional mortgage qualification tweeking has removed some buyers from the POTENTIAL PURCHASER pool, yet has effectively changed nothing. CMHC may not insure purchases in excess of a 25 year Amortization [AM] or Purchases in excess of ONE MILLION.  OK, but Genworth and MICC will gladly accept your insurance premium, funding with a first line financial institution and provide 30 year AM's.

I am more concerned about the announcement of continuing layoffs in a variety of business sectors combined with aged attrition in the workforce [retirees].  Part Time and Contract positions do not have the income and ability to qualify for mortgages.

If We are having a this conversation, this is good.

What do you want to do?


For Sale By Owner Toronto

It might be tempting to save some money by trying to sell your house on your own, but consider this; Almost 1/3 rd of all sales come from agents to agent sales, who work the neighbourhood or past Client referrals, people we have worked with before.

This means that my database of past and existing purchasers is your best opportunity to getting your house sold for more money in less time.